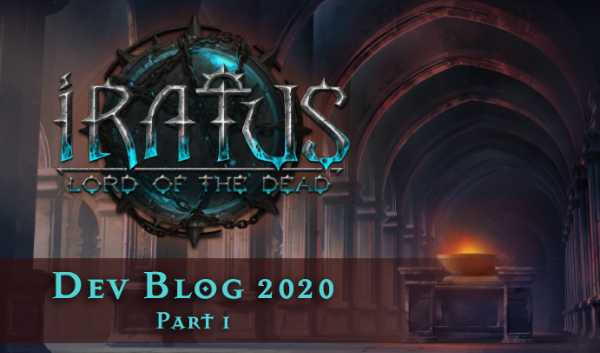 Iratus: Lord of the Dead has been in early access on Steam for over half a year. During this time, we have received a huge amount of feedback from our players. Thanks to all who shared their suggestions for improving the game, Iratus is getting better and better because of you!

In this dev blog we will start sharing our near-term plans and upcoming features.


As we said, we are planning to release the full version in the second quarter of 2020.
Now we have a large number of new functions and mechanics, so we decide to release Pre-Patch, which includes most of the planned changes (but NOT new content – that will be just in the full version of the game). There are a lot of new features, so we decided to switch to a new patch in two stages:

1. At the first stage, it will be an open beta test of all new mechanics. Anyone will be able to join the beta branch on Steam with the newest version of the game. Beta testing will begin in February — the exact date will be announced later. Instructions will be published on our Discord server (you can join it now):

2. After the beta testing will be over, a game update will be released for all our players.
Important: saves from old versions will not be compatible with the new version due to significant changes in mechanics. We’ll notify players about this beforehand. The patch date will be announced later.

So, what new mechanics are we introducing?


Gaining experience for Iratus and his minions will be much more flexible and intuitive.
How much experience is gained from the effect of an artifact or event will depend on the current level of Iratus and his minions, and even the level of the minion from the Grave will correlate with the level of the current squad. As you progress along the map, you will gain more experience from victories and find more powerful artifacts and minion items in Coffins, Chests and on Sacrificial Altar.


The most significant new feature is a much more convenient system for upgrading minion characteristics. Many players don’t like the current part system:


We decided to give players a simple tool for configuring minion characteristics:

So in the new version, minions upgrading will be more convenient and smooth. You can customize the characteristics of minions according to your chosen strategy and playstyle.


Distillation instead of improving the rarity of the parts will provide an ability to restore the Vigor of all minions for parts and/or minion items — often an opportunity to refresh a squad after a hard battle can make a difference.
In Calcination, the amount of restored mana will no longer depend on the rarity of the parts used; and needless minion items can be converted here too.
All types of Alchemy will be available from the start — fewer bounds more freedom!

Thanks for reading! Stay tuned for the second part of the dev blog. Now you can discuss upcoming features in the comments and on Discord. See you soon!
Subscribe