First teaser for DLC Wrath of the Necromancer Hello necromancers!
As you know, we are working hard on the DLC and we really want to share what it will contain!

So, first of all in DLC Iratus: Wrath of the Necromancer we are preparing new minions.

Meet the first: Reaper — the grim rider of death, bringing terror and draining life from opponents. The universal damager and reliable helper for the necromancer. 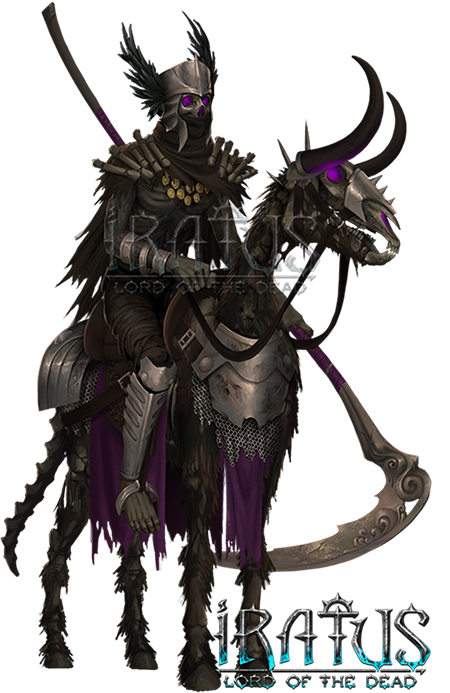 "Capable of destroying both body and soul with their necromantic scythes, they are the preferred shock troop of many a power hungry necromancer, even before Iratus took the stage. Despite this, the nature of their ability to channel destruction back to their masters is still poorly understood, since the curse they carry seems to predate the dark arts themselves.

The best that Iratus was able to discover is that it's something primal, inherent in the world that does not and might not ever have a name. But while their true origin might be an enigma, their purpose is anything but... to wage war on the living."

With his deadly scythe, the Reaper slices through the flesh of the enemy, and also restores resources to Iratus:

Reapers are capable of setting their enemies in flames, forcing them to wriggle in hellfire and lose their minds in terrible agony:

Gathering a harvest of horror and despair, the dark rider enhances all undead magic that is used nearby:

And, finally, a crushing blow with a scythe, which draws a line under the life of mortals and fills the grim figure on a bone horse with strength:

DLC Iratus: Wrath of the Necromancer will be released before the end of 2020.